Marriage and Virginity according to St. John Chrysostomos

This book is a treasure trove of the distilled counsels of St. John Chrysostom—distilled from his thorough knowledge of and love for the Holy Scriptures and his profound respect for and obedience to the mind of the Church—concerning matters of great interest and importance for people of all ages and circumstances: virginity, chastity, celibacy, marriage, contraception, parenting, family life, sexual practices, divorce, remarriage, and widowhood. You will find that this great fourth-century preacher and pastor of the Church still has an urgent (and salvific!) message to proclaim to people of the twenty-first century and beyond—the soul-profiting message of the beauty of consecrated virginity and the blessedness of marriage. I trust that after receiving his inspired counsel you will marvel at the beauty of the Scripture-based teachings so as to be lifted to the clouds in appreciation of and admiration for the God Who fashioned and sanctifies both states for His glory. May it be so!

—From the Foreword by His Grace Basil, Bishop of Wichita and Mid-America, Antiochian Orthodox Christian Archdiocese of North America

Saint John Chrysostom still speaks, today even louder than in the fourth century. Not all will wish to hear him, as not all wished to hear him then.… But those who have humility will find in him an able instructor, and will fintimes. He radiates amidst the Holy Fathers of the Church as the great defender and sanctifier of the Christian home and city. Adherence to his teaching has produced innumerable saints in the Church, spiritually born both in the monastery and in the Christian home, and is capable of producing the same today.

—from the Afterword by Fr. Josiah Trenham

Archpriest Josiah B. Trenham is pastor of St. Andrew Orthodox Christian Church in Riverside, California. A former clergyman of the Presbyterian and Reformed Episcopal Churches, in 1993 he was received into the Orthodox Church and ordained to the holy priesthood by Bishop Basil of Wichita and Mid-America. In 2004 he received his Ph.D. in theology from the University of Durham, England, where he studied under the renowned Orthodox Christian professor of Patristics Fr. Andrew Louth. Since 2004, Fr. Josiah has served as Adjunct Professor of History at California Baptist University in Riverside. He participates in yearly academic forums and symposia, conducts numerous parish retreats each year throughout the United States and Canada, and is the founder of Patristic Nectar Publications. He and his presbytera, Catherine, were married in 1988, and from their happy union have been born nine children. 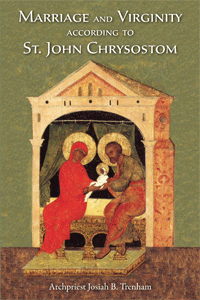